Based in two of Borgarnes’s oldest buildings, the Settlement Center is devoted to recreating Iceland’s earliest days, including one of the best-known heroes of the Icelandic Sagas, Egil Skalla-Grimsson. We also offer a cozy licensed restaurant, a café and a souvenir shop.

The center is made up of three buildings: the warehouse, the merchant house and the reception hall.

The Merchants House – The Restaurant Buildinga
The Merchants house is the oldest house in Borgarnes. It was erected here in 1877–78 by the original storekeeper; a man known as Akra-Jon. Subsequently, the store was taken over by his Norwegian creditor Johann Lange and in 1886 a young Danish shopkeeper, Thor Jensen, became Lange’s agent and took over the responsibility of running the company.

From trading house to disrepair
It was Thor Jensen who oversaw the construction of the adjacent building, a storage warehouse, in 1889. Thor Jensen left the area in 1893, but the buildings continued to be the site of trading activities for the next 70 years or so, right up to around 1959. From 1970 to 1987 the old trading store became the workshop of a tinsmith, Magnus Thorvaldsson, after which it fell into disrepair for several years.
Refurbishment and the opening of the Settlement Center
In 1995, some enterprising locals bought the building and completely refurbished it. In 1997 it opened its doors as a restaurant called Búðarklettur a name derived from the small rocky outcrop nearby. When the Settlement Center was in development in the old warehouse next door, local figures Olaf Olafsson and Ingibjörg Kristjandottir purchased Búðarklettur and financed renovations to allow the building to function as part of the new center.

The Warehouse – The Exhibition Building

Built in the late 19th century, this former warehouse served as storage space for the adjacent trading store known as Búðarklettur. The old warehouse came into the ownership of the local authorities in 1971.

The building has been refurbished under the supervision of the architect Magnus Skulason with funds made available through the Heritage Society. They commissioned the building contractor Stefan Olafsson to refurbish the building.

The partially sunken basement floor has rough-hewn stonewalls. This atmospheric space lends itself to the staging of the Egils Saga exhibition.

These buildings are two of the finest examples of heritage architecture in Borgarnes today.

The Reception Hall
Between the two existing buildings a third structure has been constructed. This connecting annex functions as a reception hall, houses ticket sales and provides access to the other buildings. It also serves as a souvenir and merchandising outlet. With approximately 140 square meters of floor space, it backs onto the rocky outcrops behind the buildings.

The design by architect Sigridur Sigthorsdottir has paid particular attention to complementing the architecture of the existing buildings.

The Settlement Center opened its doors to the public on 13 May 2006.

The beginning and the sponsors

The idea of the Settlement Center was Kjartan Ragnarsson and Sigríður Margrét Guðmundsdóttir in the summer of 2003. They introduced it to local councilors who took it well and preparations began. A business plan was prepared under the guidance of employees at SSV where the business model was decided which meant that the operation should be under the control of Sigríður and Kjartan. When the shows were in preparation at the packhouse next to the restaurant, children of former salesman Ólafur Sverrisson and his wife Anna Ingadóttir decided to buy the restaurant and adapt the planned operation of Landnámssetur in memory of their parents. They made improvements to the house and the installation of the exhibitions, and have always been important backbones of the Settlement Center.

A number of companies supported the installation of the exhibitions, which include the Mýrasýsla Savings Bank, VÍS, Samson, Ölgerð Egils Skallagrímsson, Orkuveitan, Samskip, Límtré Vírnet, and Loftorka. The municipality Borgarbyggð was very important in supporting the establishment of Settlement Center, giving it the exchange rate for the first operating years. The Culture Council of West Iceland has also supported the cultural work, which has been a permanent part of the business from the beginning. All of these parties are very much appreciated. 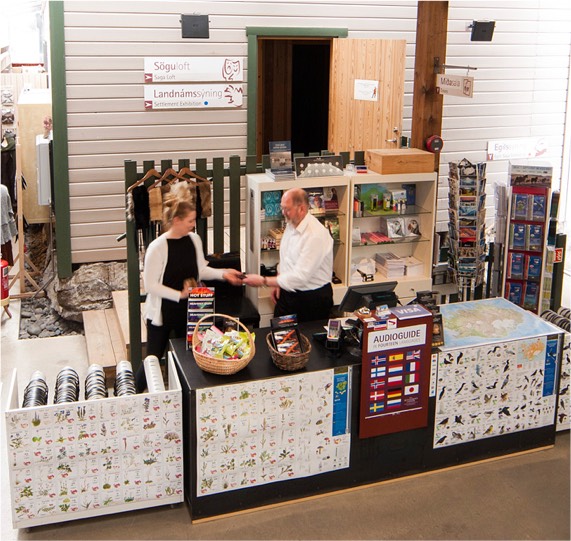 Home What is the Settlement Center?
#settlementcenter
X